The Ecopark Association (FFE) was founded in 1992 by 21 organisations. It is an umbrella association with about 50 member organisations today. The Association was founded to oppose the major exploitation that then threatened and still threatens the natural and cultural values that the area embodies. We used the name Ecopark but the official name is now The Royal National City Park.

After intensive activity by the Association, the World Nature Fund, the World Wildlife Fund and other environmental organisations, a new statute was enacted to apply to the Ecopark by supplementing the Swedish Environmental Code.

”The Royal national City Park area is a national city park.
New development, new buildings and other measures shall only be permissible in national city parks if they can be undertaken without encroaching on park landscapes or the natural environment and without detriment to any other natural and cultural assets of the historical landscape.”

However, this did not settle things for ever. One of the Association’s most important tasks is therefore to maintain a watchful eye on building projects and other exploitation proposals and to react to them, both in the Ecopark – The Royal National City Park – and outside it, as they could jeopardise the natural systems that allow flora and fauna in the Ecopark to propagate. 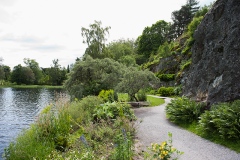